University of Pittsburgh players are pretty furious after Todd Graham texted them to tell them he was no longer their coach as he was accepting the head coaching position at Arizona State University. 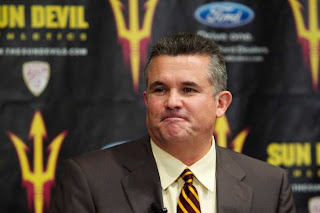 College football is all about money and while we've come to expect dishonesty from coaches like Bobby Petrino, Lane Kiffin and Nick Saban, Graham's low-class exit has set the bar even lower.

Graham has made a career of only staying a short while in one place as he spent one season as head coach of Rice, four seasons at Tulsa and now just one season at Pitt before bolting to the desert to take over the Sun Devils.

Just three weeks ago three Pitt assistants accepted positions at Arizona under Rich Rodriguez, a move that led Graham to call them "mercenaries."  I sincerely hope that Rich Rod destroys this douchebag every opportunity he gets.

After watching the way Arizona State conducted their coaching search and the way they screwed over June Jones it seems as though Todd Graham and Arizona State is a perfect match.

So here's to you Todd Graham.  May you enjoy 3 win seasons and accepting a coordinator position in the Sun Belt Conference in a couple of seasons.
Posted by Dustin Davis at 5:17 PM